​Leighton Calkins was the Mayor of Plainfield from 1915-1920. He is recognized as the creator of the handicap system used in golf today. Calkins designed the system in 1904 for Plainfield Country Club, where each hole still boasts a “Calkins tee.” Calkins was instrumental in building Plainfield’s City Hall.
​​“The principal feature of this system is that not only is the good player handicapped because he is a good player, but the bad player is also handicapped because he is a bad player. The reason is this: The object of handicapping is to put all players on the same level, and if an allowance of a certain number of strokes is to be made to the less skillful player because he cannot play as well, some allowance ought to be made to the more skillful player because he cannot improve as much.”
- Leighton Calkins (Introduced in 1905. Revised 1910.) 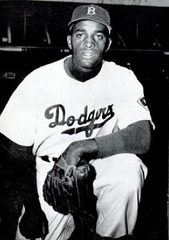 Joe Black, Baseball Digest, page 2, January 1953 issue. Source: Wikipedia.
Joseph Black was an American baseball pitcher in the Negro League and Major League Baseball for the Brooklyn Dodgers, Cincinnati Redlegs, and Washington Senators. Black became the first African-American pitcher to win a World Series game while pitching for the Brooklyn Dodgers in 1952 and captured the National League Rookie of the Year Award at age 28.

A native of Plainfield, New Jersey, he starred at Plainfield High School. Black attended on a baseball scholarship and graduated from Morgan State University in 1950.

After leaving baseball in 1957, Black taught junior high school in Plainfield for a year. Black then took a job with the Greyhound Bus Co., eventually rising to become vice president in charge of special markets until his retirement.

Battle Of The Short Hills 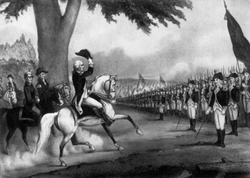 Washington And Continental Army. Currier & Ives. Source: National Archives and Records Administration.
On June 26, 1777 George Washington's Continental Army fought a battle in the plains below the Watchung Mountains with the British (and Hessian) troops led by British General William Howe. The battle at the Short Hills (near present day Ashbrook Golf Course) ensued for two hours, with the Continental Army eventually being driven back.

The engagement was a tactical retreat which delayed the British Army and enabled George Washington to save the Continental Army by pulling it back into the Watchung Mountains.

Lenapehoking - The Land Of The Lenape 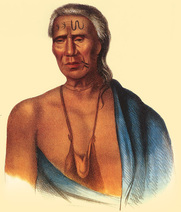 Lapowinsa, Chief of the Lenape, by Gustavus Hesselius. Source: Library Of Congress.
In the 16th century the Lenape peoples lived in an area roughly between the Delaware and lower Hudson rivers. The land included what is now New Jersey, eastern Pennsylvania, southeastern New York State, northern Delaware and southeastern Connecticut. The Lenape are called Delaware Indians after their territory that flanked the Delaware River basin.

In 1609 Henry Hudson, an English captain, was hired by the Dutch East India Company to find a Northwest Passage to Asia. Hudson never found a passage, but he did bring news of an amicable people willing to trade in the highly prized beaver pelts. With raised interest, Dutch merchants-traders embarked on several private commercial expeditions. 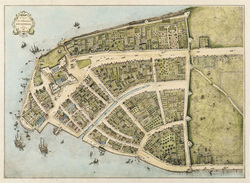 Redraft of the Castello Plan of New Amsterdam, by John Wolcott Adams & Isaac Newton Phelps Stokes. Source: Wikipedia.
In order to maximize their profits thirteen Dutch merchants decided to form the New Netherland Company and on October 11, 1614 they successfully petitioned the Staten Generaal - the dutch equivalent of the US Congress - for exclusive trade rights between the 40th and 45th parallel for a period of three years. In 1625 the New Amsterdam fur trading settlement was founded at the southern tip of Manhattan Island, an ideal location for trade with access to the ocean and the Hudson River.

The province of New Netherlands became a territory of England when on August 27, 1664, four English men-of-war, commanded by Colonel Richard Nicolls, sailed into New Amsterdam Harbor. On September 8, 1664 Dutch governor Peter Stuyvesant signed the colony over to the British, who took control of Fort Amsterdam, and annexed the entire province.

New Jersey - Crossroads Of The Revolution 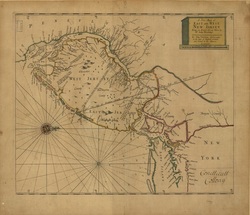 Map of East and West Jersey, John Worlidge. Source: Library Of Congress.
On June 24, 1664 the Duke of York granted the land between the Hudson River and the Delaware River to two friends who had remained loyal through the English Civil War: Sir George Carteret and Lord Berkeley of Stratton. The area was named the Province of New Jersey, after the Isle of Jersey in the English Channel.

In April 1775, the Battles of Lexington and Concord in Massachusetts marked the beginning of the American Revolution War. Positioned between the new nation's capital in Philadelphia and the British stronghold in New York, British and American armies crossed New Jersey numerous times. New Jersey today is often referred to as "The Crossroads of the Revolution." 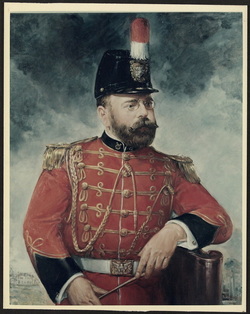 Painting of Sousa during US Marine Band era. Source: Library Of Congress.
John Philip Sousa was an American composer and conductor known primarily for military and patriotic marches. After being honorably discharged from the Marines, John Philip Sousa organized his own band. The first concert by Sousa's New Marine Band was in Plainfield, NJ, on September 26, 1892.